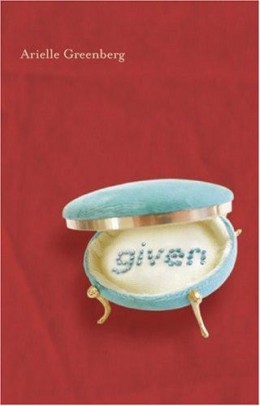 Arielle Greenberg’s debut Given promises, and delivers, up-to-date, intellectually challenging comic verse, a nose and a half ahead of most of her peers: her best work remains both slippery and sharp, like ice skates in use. Greenberg’s most attractive, most clearly American pieces incorporate, and answer, the styles and signatures of poets like Dean Young and Mark Levine, telling the “”International Herald Tribune,”” for example, “”Your newspaper is a two-star hotel””; her aggressively contemporary figures evoke worlds her readers know well: “”All the soft serve flurry metaphors intended, right.”” —Publisher’s Weekly

From Given:
Tornado at the Dairy Queen

We were there as a reunion.  It’s no joke,
but an ice cream place in the middle of a nation
in the middle of an era near its ending like a fable
right in the middle of a tornado.  All the frosty-freezes and swirl cones.
All the soft serve flurry metaphors intended, right.
Inside the exclamation mark, a fuzz of alumni
wrung the ankles of our new neighbors, kissed, wept,
and the thing that came at us came at us with its white and terrible roar.
It doesn’t sound like thunder or a train going past.
They say it but no.  Imagine sugar with all those chunks of chemicals inside
and whipped through a froth-maker.  Imagine it.  You can’t imagine.
The alumni and counter workers and prom-night parents praying
and clutched, just a grip in the dark, in the walk-in,
six adults in a cooler in the middle of a nation
with almost no ears left, and certainly no roof.  Barely
walls when we got out.  A foot of wall
hardly.  Just a mess—paper cups and brick,
that one sobbing girl, scoops, void of wind
where wind was.  Thank you.  We thought we would
die.  We were still wearing the right kind of white hats.
In the midst of it, we saw nothing.  The sweetness twisting furious past.